aka YAC   |   Amherst, MA http://www.youthactioncoalition.org
This organization has not appeared on the IRS Business Master File in a number of months. It may have merged with another organization or ceased operations.
This organization's exempt status was automatically revoked by the IRS for failure to file a Form 990, 990-EZ, 990-N, or 990-PF for 3 consecutive years. Further investigation and due diligence are warranted.

Our Arts-for-Change project is comprised of individual programs
interwoven through a shared pedagogy of in-depth art training, social justice
education and community organizing.

Through our GirlsEyeView project (photography-based project for young women
running in Ware since 1997 and Amherst since 1999), members have launched over
45 exhibitions of their work, sold their photographs, led discussions on issues
of growing up female, and engaged in exchanges between the members of Amherst
and Ware. In this context they are coming together across the race/class divide
and examining critical issues together and creating artwork that speaks to
their concerns.

Get Up Get Down—a social justice public art group active since
2000—works with youth in Amherst to create public works that speak to their
concerns as youth. They have created 2 large-scale 3-D murals (one in town and
one in their high school) that speak about consumerism, the aftermath of 9/11
and Hurricane Katrina, and identity politics in America, as well as many
individual artworks, a puppet parade and hosted 2 regional youth conferences in
their early years. They have recently been commissioned to produce artworks and
signage for local businesses and individuals and are making a name for
themselves as youth artists with a mission.

In Video Vanguards (active since 2003), youth of color and allies work
together as media producers, critics and educators, as they use their video
works to speak to deep issues of race, class, gender, war, isolation,
prejudice, homophobia, juvenile justice. VV has been a beacon for YAC,
spearheading our anti-racism work through thought and action. Through this
project dozens of our youth and adults have been to trainings, led workshops,
and disseminated their work to wider audiences. In this space young people of
color come together with allies to talk about the effects of living in a
majority white area and position their work around these issues.

Our newest program is Our work is powerful and effective in part due to our
small group sizes (8-15), and each year approximately 60-80 young people enroll
in our programs. Yet the effects
are far-reaching—with exhibitions, screenings, festivals, and other actions,
our youth participants are reaching hundreds of citizens annually—putting their
voices and visions out to the community, and building a youth movement for
social change through the arts. 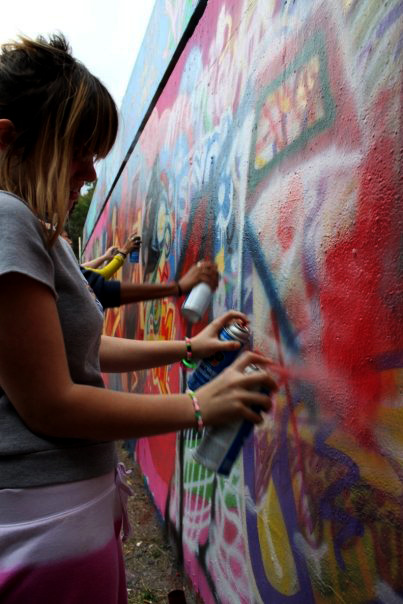 Get Up Get Down youth begin their mural work by spray painting the "free wall" at Hampshire College. 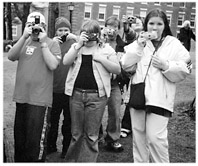 Board of directors
as of 06/05/2016
SOURCE: Self-reported by organization
Board co-chair