Prep for Prep develops ethical and effective leaders who reflect our diverse society for the enduring benefit of all.

Prep for Prep is a long-term investment strategy to develop the leadership potential of able young people from segments of society grossly under-represented in the leadership pool from which all of our major institutions draw.  By expanding the nation's leadership resources, we aim to impact indirectly on a set of inter-related problems that threaten to rend our society.  The Prep Community includes over 4,500 students and alumni.

Student Services and Organizations (B80)

Educational Services and Schools - Other (B90)

As the United States population diversifies at an unprecedented rate, our progress in creating a demographically representative leadership pool continues to fall behind. A national study by the Jack Kent Cooke Foundation concluded that in the absence of interventions such as Prep, low-income, high-achieving students disproportionately fail to achieve their potential at every academic juncture. Additionally, Harold L. Hodgkinson, Director of the Center for Demographic Policy at the Institute for Educational Leadership, predicts that by 2020 half of all U.S. children ages 0-18 will be non-white. However, according to recent analysis conducted by the New York Times, of the 503 most powerful people in American culture, government, education and business, only 44, or 9%, are minorities. Prep for Prep is shaping the next generation of leaders so that the leadership pool in this country better represents its diverse demographic.

Finally, Prep college undergraduates and graduates have access to counseling and a broad range of professional advancement, leadership development, and social and professional networking opportunities ("Undergraduate Affairs” and "Alumni Affairs”).

Evaluated via the Impact Genome Project (2019) 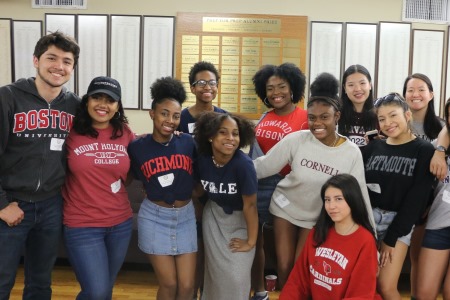 Creating a Generation of Diverse Leaders

Number of clients placed in internships

Outcome - describing the effects on people or issues

Over 80% of the graduating senior Class of 2018 enrolled in a Barron’s-ranked Most or Highly Competitive college this fall, with over 20% of the class matriculating in an Ivy League school.

Outcome - describing the effects on people or issues

Prep’s investment in its students is leveraged 6x through independent school and college financial aid.

Prep for Prep develops ethical and effective leaders who reflect our diverse society for the enduring benefit of all. Prep identifies talented students of color, prepares them to thrive in independent day and boarding schools through a rigorous academic instruction program, exposes them to enrichment programming to broaden their horizons, and provides them with a sense of community, peer support, social-emotional guidance and counseling, and a range of professional development opportunities.

Counseling: Prep provides individual counseling for approximately 700 students annually through their years in independent day and boarding schools, monitoring students’ academic and social-emotional progress and providing assistance to students and their families as needed, including tutoring and emergency fund support. Social and cultural activities help to ease social transitions and maintain a sense of community while building social capital. The counseling team works to equip students, who are also navigating adolescence, to address issues ranging from imposter syndrome and micro-aggressions; to perfectionism, anxiety and depression; to cultural divides, assimilation and gender identity. Services and support are also made available to approximately 600 college students annually through our Undergraduate Affairs department.

Leadership Development: Prep services over 1,300 independent school students (722) and college students (605), providing them with leadership development and professional advancement opportunities. Activities include: access to sleep-away c a Prep-Sotheby’s partnership for Prep’s Summer Arts Academy; A Prep-Google partnership for Prep’s Institute for Entrepreneurship (IFE); College Guidance (including college campus visits); Student Leadership Retreats; more than 300 summer internship and career seminars with leading firms and companies, as well as nonprofit and public service agencies; exposure to STEM fields and computer coding; travel abroad; experiential learning opportunities; and other summer programs aimed at expanding student horizons. These opportunities are vital to increasing students’ sense of belonging, understanding the breadth of life’s possibilities, and building a stronger sense of self.

Prep consistently serves as a model to other educational organizations regionally and nationally. Our approach to launching leaders by providing access for students of color to a superior education, college success, and career opportunities has been adopted or incorporated by at least 18 organizations in the United States and abroad.

Our role in advising and influencing the adoption of best practices has naturally grown out of our signature networking initiative, Smart Connections, a platform developed by Prep for Prep to facilitate the interaction between Prep-like programs in order to share best practices and impact a greater number of young people—321 organizations and social entrepreneurs have benefited from the organization’s expertise.

We have emerged as a trusted resource to our independent school partners in sharing our best practices for supporting all students’ social-emotional learning and self-identification. We regularly convene school administrators and colleagues in conversations on how to serve the needs of diverse students and prepare them to succeed academically, socially, and emotionally in rigorous independent schools and colleges.

Prep for Prep’s Associate Executive Director, Jackson Collins, wrote his doctoral dissertation on the experiences of students of color in independent schools, using three conceptual frameworks: sense of belonging, emotional well-being, and racial coping self-efficacy and competence. The mixed-methods study, completed in 2018, reveals insights about the relationships between school climate, identity and belonging, racial coping strategies, and stress. The research findings and Dr. Collins’ recommendations have proven to be a valuable resource for school leaders and educators.

- Each year, approximately 75% of an admitted cohort of students (a Prep “Contingent") completes the 14-month Preparatory Component. These students earn places at more than 70 independent day and boarding schools, which together commit approximately $35 million annually in financial aid to Prep students.

- Prep's Professional Advancement unit places approximately 300 students in summer internships at 140 participating companies with Prep Trustees and Associates Council responsible for securing 65% of the internship placements and Prep alums 46%. Through our summer internship program, high school and college students challenge themselves through internships in a variety of fields including law, finance, medical research, advertising, nonprofit, and media.

- Overall, nearly 90% of Prep's 2,829 college graduates have earned their degrees from the most competitive colleges in the country; 35% have graduated from Ivy League schools.

-Among Prep alumni who have completed or are pursuing graduate degrees, we count 281 JDs, 201 MBAs, 116 MDs, and 116 PhDs​ at top graduate schools.

-Our alums are distinguishing themselves professionally in the arts, business, education, finance, health care, law, and public service, among other industries.

Board of directors
as of 09/18/2020
SOURCE: Self-reported by organization
Board co-chair