aka ARKIVE   |   Washington, DC
This organization has not appeared on the IRS Business Master File in a number of months. It may have merged with another organization or ceased operations.
This organization's exempt status was automatically revoked by the IRS for failure to file a Form 990, 990-EZ, 990-N, or 990-PF for 3 consecutive years. Further investigation and due diligence are warranted.

Wildscreen USA (www.wildscreenusa.org) is a nonprofit organization based in Washington, DC that is working to promote the public appreciation of biodiversity and the conservation of nature through the power of wildlife imagery.

Wildscreen USA is spearheading U.S. efforts in support of the ARKive project - a unique global initiative gathering together the very best films and photographs of the world's species into one centralized digital library, to create a freely-accessible, audio-visual record of life on Earth.

To this end, Wildscreen USA is coordinating work with leading media and environmental groups located in the U.S. and working with the U.S. educational sector and the American public to continue to grow ARKive's substantial U.S. audience.

As Sir David Attenborough states, we believe that, ‘‘films are key in the battle to protect our imperiled natural world.” Films and photographs are an emotive, powerful and effective means of building environmental awareness – they can bring a scientific name to life, show what a species looks like and why it is special. As such, they are a valuable educational resource and conservation communications tool.

Continued habitat destruction and the rise in extinction rates also mean that for many species, films, photographs and audio recordings may soon be all that remains. They are, therefore, important historical and scientific records of the species they depict.

This material is, however, scattered around the world, held in a variety of commercial, specialist and private collections, much of it inaccessible to the general public and unavailable for scientific and educational use. Like the wildlife they depict, the images of these rare species are themselves endangered, with no guarantee that they will survive for future generations. Many records have already been lost forever, with companies basing storage decisions on commercial, rather than scientific, cultural or historical values. Privately owned materials, sometimes of considerable significance, may also be lost or discarded following the death of their owner. ARKive is bringing these important records together in one place for safe-keeping.

How can the public care about or protect a species they do not know exists? This is where ARKive comes in. To date, ARKive has profiled over 5,000 threatened species with more than 40,000 images, film, and audio clips.

ARKive is leading the 'virtual' conservation effort - gathering together films, photographs and audio recordings of the world's species, prioritising those most at risk of extinction, and building them into comprehensive multimedia digital profiles.

Preserved and maintained for future generations, ARKive is freely accessible to all, from scientists and conservationists to the general public and school children. We engage our visitors not only through our website, but also via Facebook, Twitter, YouTube, Flickr, and via our own ARKive layer on Google Earth. 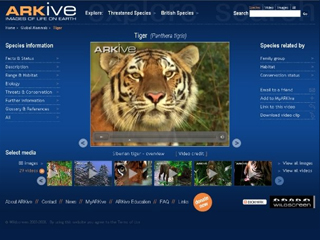 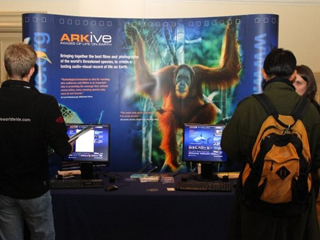 ARKive at a Science Education Conference

Board of directors
as of 06/06/2016
SOURCE: Self-reported by organization
Board chair