CGE represents accredited member universities and colleges who engage in global education programs in nations with a common vision for meeting educational needs, providing service and sharing skills. CGE provides a framework to work cooperatively to be involved in charitable programs through overseas study and international programs that serve: 1. As a clearinghouse for information on the involvement of all member bodies in international education 2. As a stimulus and catalyst for establishing and enhancing educational programs in international settings 3. To assist participating institutions in developing and maintaining quality control mechanisms 4. As a channel for obtaining appropriate human, financial and other resources and 5. To provide a mechanism for meeting educational. 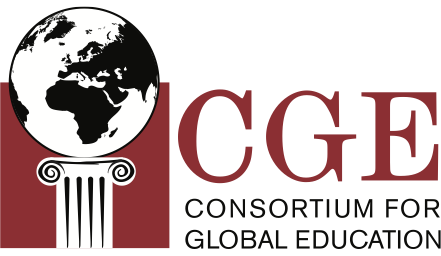 CGE membership of universities and colleges manages a network of international programs involving campus leadership, faculty, and students. Our global vision is to engage our members in sustainable programs and projects with our vast cohort of educators overseas representing universities, schools, government offices, and humanitarian groups in more than 90 nations. Through CGE, the presidents, provosts and faculty participate in international visits to promote mutual understanding of culture and peoples. These relationships between CGE member universities and overseas educators multiply to create programs of study abroad, collaborative research, joint degrees and faculty-student exchanges. In each CGE program abroad, CGE participants engage in community service. In the Middle East, CGE members assist school programs for refugee children. CGE was a founder and catalyst for a National Day of Education for special needs students. CGE engages with entrepreneurship for distressed youth.

Through CGE, the presidents, provosts and faculty participate in international visits that promote mutual understanding of culture and peoples. These relationships between CGE member universities and overseas counterparts multiply to create programs of study abroad, joint degree programs and faculty-student exchanges.

In each CGE program abroad, CGE participants engages in community service. In the Middle East, CGE members assist school programs to be started for refugee children in Lebanon, Jordan and Greece. CGE has been one of the main supporters and catalysts for the National Day of Education for Lebanon and their building of a center for students with special learning differences. This has become a model for other Arab nations. In Asia, CGE trains national teachers of English who want to enhance their teaching skills and build better school programs. In Africa, CGE partners with other non-educational organizations to provide them with educational materials and resources for remote village schools.

During this international COVID crisis, CGE members utilized their networks to provide online assistance and food resources to partners who found themselves struggling for basis sustenance.

CGE hosts several J-1 visa programs, through the USA Department of State, for international professors, scholars and non-degree exchange students who come to USA campuses to learn and hone their skills for teaching, researching, and collaboration. These programs range from a semester to up to 5 years for Professors, 1 to 2 years for non-degree students and training program interns, and from several weeks to 6 months for research Scholars.

Through CGE’s work in a wide range of nations, both faculty and students promote professional training programs for officials and educational leaders, study abroad for students, and teaching opportunities overseas that are based on quality academic experiences. CGE participants promote dialogue that initiates and engages meaningful educational programs of mutual benefit between educators in majority Christian nations and nations representing other majority faiths.

1. To provide invitations to faculty and research graduates through the Exchange Visitor and Short-Term Scholar J-1 visas programs. More than 15 CGE member universities and colleges participate yearly in this program of reaching out to colleagues and students overseas.

3. To cooperate with new global universities and partners that encourage international goals for higher education.

6. To cooperate with skilled and trained CGE educators who work in education overseas with an identity to assist CGE programs in universities, schools, centers, or training programs.

7. To increase our cooperation with third-parties: to provide insurance for international students and faculty that meets SEVIS criteria; to offer consultation for risk management, to offer tele-health medical service options for all students and faculty for within USA and during global travels, and provide teachers for universities/colleges and schools in overseas locations.

2. Students enrolled in a partner university overseas, can study in the USA for up to 24 months, interns up to 12 months, and some student programs (including ESL studies) in cooperation with overseas partners. Over 30 students participated in the year 2019.

4. CGE annually host international speakers at CGE's Annual Conference held on one of the member campuses in the USA. In 2019, CGE participated in IIE's 100th Anniv. Conference (NYC), the 2019 National Education Conference in Lebanon and the meeting with the Council for Inclusive Schools initiative in Jordan hosted by Prince Ra’ed, Minister of Higher Educ., and 5 key International Schools and 25 public schools.

5. CGE recruits students for enrollment in study abroad programs held on CGE overseas member or partner campuses. Additionally CGE partners with CAPA The Global Education Network to provide student study and internships in 7 global cities. CGE has agreements also with the American College of Thessaloniki and many universities in Asia.

CGE began over 30 years ago in the categories listed below. Each year the progress and accomplishments for each year are evaluated including those areas and projects to show how we can better serve our members, educational partners and colleagues worldwide.

1. CGE serves as a clearinghouse for international education information. Yearly, CGE maintains a list of geographical partners, program categories, type of project, and contact names of program leaders. An upcoming goal is to cross match these with overseas needs to quickly locate skill sets and experience.

2. CGE is a catalyst for establishing and enhancing educational programs in international settings. CGE evaluates programs yearly by outcome performance, participation surveys and CGE member reflexions. CGE has a historical ethos for multiplication and sustainability for current programs. CGE plans to initiate, construct and approve three or four new overseas projects each year to the list of CGE programs.

3. CGE assists participating institutions in developing and maintaining quality control mechanisms for all instruction, research and public service activities related to the work of the consortium. CGE members are all accredited universities which provides compliance with maintaining quality control on academic programs, meeting the criteria of faculty and students involved overseas, and meeting international program criteria and university standards. CGE maintains membership with entities specializing in the fields of study abroad, international education, and internships. CGE consultants plan in the future to present more actively at conferences to stay updated.

4. CGE is a channel for obtaining appropriate human, financial and other resources needed to respond to opportunities for educational involvement in international settings. CGE maintains a close connection with member and partner leadership, staff of overseas programs, and faculty approved to provide guidance and to participate in CGE projects and programs for study abroad in over 20 vetted locations. CGE has added a reserach component to these programs through a new CGE Research Institute formed in 2020.

5. CGE provides a mechanism for meeting educational needs cooperatively which cannot be met by individual member institutions. CGE for over 30 years hosts an Annual Meeting for leadership. CGE maintains four J-1 visa licenses for all CGE members to access. These are maintained at CGE' central office location where visas are processed for the CGE member Sites of Activity. CGE continues to add J-1 visa licenses that will benefit CGE members such as the recently added University and College Student non-degree visa for short term or up to two year study opportunities with the cooperation of a partner overseas university. Additionally CGE provides an umbrella for accessible international recruiting with an AmeriStudy program, travel insurance, and a newly added Telehealth program.

Board of directors
as of 2/25/2021
SOURCE: Self-reported by organization
Board co-chair