Legal Aid at Work ("LAAW") protects and expands the rights of low-wage workers, their families, and communities by educating about legal rights, providing legal representation, and advocating for more responsive laws. We give free, individualized legal advice-and-counsel to 3000+ workers and unemployed persons across California each year about their job-related legal rights, pursue targeted "impact litigation" cases that promise to improve the laws applicable to everyone, conduct community outreach and education for workers, their advocates, and social service providers, and draft and promote laws, regulations, and policies to strengthen civil and workplace rights at the local, state, and federal level. 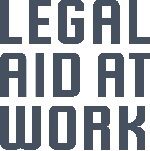 Our clients experience violations of their civil rights in their workplaces and communities including: • Wage theft • Discriminatory treatment, harassment, violence or retaliation on the basis of race, national origin, language, gender, sexual orientation, gender identity, domestic violence, and disability • Unlawful termination • Incorrect denial of Unemployment Insurance or State Disability Insurance • Failure of employers to comply with state and federal family medical leave and care giving laws • Denial of accommodations for disabled employees in the workplace, and • Failure of communities to provide and maintain ADA-compliant public infrastructure and facilities.

Guided by a mission of gender & LGBTQ justice, Legal Aid at Work's Gender Equity & LGBTQ Rights Program partners with clients to vindicate their rights and build power in their workplaces and schools. Our clients include low-wage women; lesbian, gay, bisexual, transgender and queer (LGBTQ) individuals; immigrants; military veterans; survivors of harassment as well as domestic and sexual violence; student athletes; and other under-represented individuals.

The Central Valley Workers’ Rights Project is committed to providing access to justice for workers, regardless of immigration status, who face discrimination, harassment, retaliation, and other unlawful conduct on the job.

Our National Origin and Immigrants’ Rights Program advocates for the workplace rights of persons who face discrimination because of their ethnicity or the parts of the world they have migrated from. We do this through litigation, policy work, and community education.

Among other things, our cases have challenged discrimination against workers because of their ethnic identity, the languages they speak or their level of English language proficiency, their religion or their citizenship status. We represent undocumented workers, who have virtually the same legal rights as all employees but whose employers threaten them for asserting those rights, including by reporting them to ICE. We sue to stop and remedy employer practices that appear to be even-handed but, in reality, fall the hardest on immigrant workers and workers of color.

The Racial Economic Justice Program empowers Black and Brown workers who are discriminated against and economically exploited. We protect and advance the civil rights of people of color in the workplace and beyond, with the aim of building a world with racial equity, solidarity, respect, dignity, and economic justice for all. We seek systems change through policy advocacy, legal services, organizing, community education, and litigation.

We offer free, confidential advice through our helplines, represent individuals in low-wage jobs and industries, litigate race discrimination cases, and organize and educate workers to fight against discrimination and vindicate their rights under Ban the Box and Fair Chance laws. We also advocate for systems and policy change to challenge structural racism and advance the rights of marginalized workers, including workers of color and persons with arrest or conviction records in California and beyond.

Through legal representation and advocacy, the Wage Protection Program works to build a just economy where all workers are empowered to win fair wages and dignified workplaces. Our program assists individual workers and groups of workers seeking to enforce their right to the minimum wage, overtime pay, meal and rest breaks, sick pay, and reimbursement for work-related expenses. We also assist workers who have been retaliated against for pursuing their rights and those who have been forced to work through threats of violence, fraud, or coercion.

We know that workers have more power when they fight for their rights collectively, and our Program regularly supports community-based organizations and groups of workers to enforce their rights.

We empower workers who are parents, pregnant, family caregivers, or caring for their own health to access time off from work, paid leave, and other workplace accommodations. We offer free, confidential advice through our Work & Family helpline, represent individuals in low-income jobs and industries, and advocate for systems and policy change to advance the rights of working families by partnering with families, healthcare and social service providers, and government agencies. Our work is rooted in our strong belief that no worker should have to choose between their job and income and the health and wellbeing of their family.

Legal Aid at Work seeks equality, fairness and dignity for all. We protect and expand the rights of low-wage workers, their families and communities by educating about legal rights, providing legal representation, and advocating for more responsive laws.

We aim to:
• Increase the financial stability of low-wage workers, their families, and their communities
• Improve the health of families with low incomes
• Affirm the equal dignity of the many diverse communities we serve, and
• Provide the highest-quality legal representation to persons who otherwise would not be able to afford a lawyer.

We give free, individualized legal advice-and-counsel to thousands of workers and unemployed persons across California. We pursue targeted “impact litigation” cases that promise to improve the laws applicable to everyone. We conduct community outreach and education for workers, their advocates and social service providers. And we draft and promote laws, regulations, and policies to strengthen civil and workplace rights at the local, state, and federal level.

We are uniquely situated to address almost any job-related problem that a worker might experience because of our deep technical expertise in the employment laws affecting the inter sectional populations we serve and because of our close ties to community groups.

We are the oldest legal aid organization in the West, having served low-income Californians for more than 100 years. Until recently, we were known under our former name as the “Legal Aid Society – Employment Law Center.”

Recent accomplishments include the following:
• We and our co-counsel at CRLA obtained a $1,000,000 settlement for client—a dairy worker who had experienced egregious immigration-related retaliation—after making powerful new federal case law that protects countless undocumented workers from retaliation at the hands of third parties acting in their employer’s interest.
• We are leading the charge for legislation that makes paid family leave accessible to all Californians—especially for low-wage workers. Currently, workers who qualify for paid family leave can still be fired when they take it. Our legislation would end that perverse result, and in so doing, improve the health and economic security of millions of low-income Californians.
• We launched our 12th Workers’ Rights Clinic site in Los Angeles in collaboration with the Los Angeles Black Worker Center and UCLA School of Law, with a special focus on providing legal services to workers fighting race discrimination. Each year our statewide network of clinics and helplines serves over 3,000 vulnerable low-wage workers throughout California.
• We continue to fight for equal transit access for persons with mobility disabilities in our class action against BART, along with co-counsel at Disability Rights Advocates. Our clients rely on BART’s transit services but are unable to access them because of filthy elevators soiled by human waste, non-working escalators, broken service gates, and other consistent failures in the system.
• We filed a class action lawsuit against the state of Hawaii Department of Education for Title IX athletics violations at the largest school in the state with co-counsel from the ACLU of Hawaii and Simpson Thacher & Bartlett LLP. Because Hawaii has a unique statewide school district structure, this single case has the potential to result in systemic change throughout the entire state, if not the country.
• We continue to aggressively pursue wage theft violations in sectors where it is particularly prevalent, including the construction, caregiving, janitorial, and restaurant industries. In 2018 alone, we have secured over $2,500,000 in settlements and awards for low-wage workers experiencing wage theft—an especially significant amount for our clients, many of whom are living paycheck to paycheck, and sending a strong signal to would-be violators of the severe consequences of engaging in this illegal practice.

Going forward, we anticipate continuing to be at the vanguard of impact litigation, policy reform, and direct legal services work serving the most vulnerable populations in California, including undocumented immigrants, people of color, those with limited-English proficiency, survivors of domestic violence, caregivers, members of the LGBTQ community, pregnant women, new parents and working families, people with disabilities, military veterans, girls from low income neighborhoods seeking equal athletic opportunities at school, and workers making claims for unpaid

Board of directors
as of 01/13/2023
SOURCE: Self-reported by organization
Board chair